Where is that that wolf?

Per pixel Phong and Blinn


It sound like some child’s book title doesn’t it?


While per vertex shading is fast and simple, it’s hardly produces a desired result in most cases. This is most noticeable in objects with low polygon count, and especially in the specular channel.

The solution is to move the calculation of color and reflection to the pixel program. 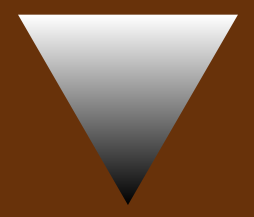 Instead of interpolating color across surfaces, we can interpolates the normal per pixel, and only than reflect. The picture below show the described approach:

The vertex’s normal slightly changes per pixel, creating a more subtle and gradual curve, allowing light to be reflected more convincingly. Notice the smooth arc created. As always, better results come with lower performance – as the normalization happen every pixel instead of every vertex, the rendering takes longer.


In order to achieve this result, we will use the classic Phong model (we will use the same reflection method, but per pixel. When people say Phong, they usually refer to this)

First, we need to redistribute the calculations between the two programs in order to redefine their input and output structs.

All calculations we require that will not change per pixel are to be performed in the vertex program:


All calculations that can vary per pixel or directly related to the calculation of color values are to be performed in the pixel program:

The first problem you will encounter when trying to pass data from a vertex program to a pixel program is that pixel programs can only accept one of two things that we can use: COLORn or TEXCOORDn.

So, how do we pass a normal or a direction vector to the pixel shader?
Well, you will be surprised to hear that we use TEXCOORDn for a lot more than just textures. We will use TEXCOORD spots to deliver data from vertex to pixel.

Our vertex program will look very much like the way it did in the previous tutorial, but with less tasks and more return values:

Remember, we are not normalizing in the vertex program.

First thing we have to do is normalize the normal, lightDir and viewDir vectors so they will differ per pixel:


Now, having per pixel data, we can calculate the diffuse and specular using the same algorithm we used in Gouraud:


It may look like not much had change, but compare the two shaders in a complex model (even the classic ogrehead.mesh used in ogre tutorial will suffice) and you will notice a big difference (especially in specular)

Blinn is a modification for the Phong shader. Instead of calculating the reflection vector, it calculates an approximation: 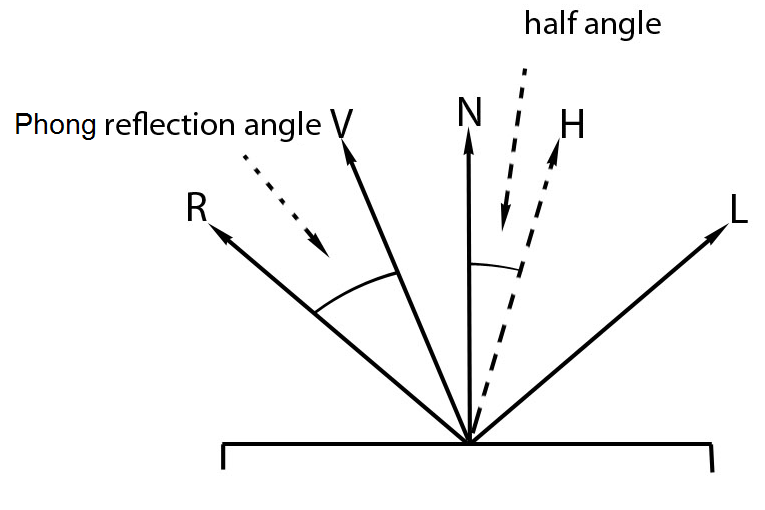 The new angle will always be smaller than the angle used in Phong, creating a larger specular highlight, but we can compensate with a higher exponent value. That said, they will always be slightly different.


Why approximate, when the result is actually a slower shader (an additional normalization)? Well, the reflection in Blinn tends to keep its shape better at high angles, and tends to have a softer look.

Example:
Blinn-Phong and Phong using the same exponent for specular

See how the reflection in Blinn keeps its round shape even when observed at high angle, while Phong tends to stretch. 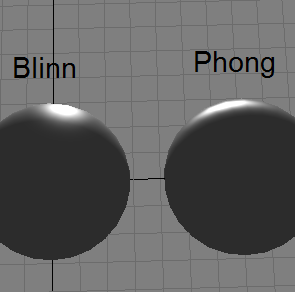 In the second picture you can see the full reflection. Using same exponent gives a larger, softer highlight in Blinn. 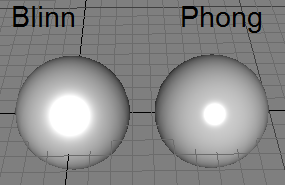 Each one has its advantages. It depends on what is the result you are looking for.

Attenuation is the way the light changes depending on its distance from the object. Read this this little article:
http://www.ogre3d.org/tikiwiki/-Point+Light+Attenuation
It is defined by these equations:


As you can see it’s not a big deal, but it is an important part of using lights.


Now we need to add the calculation to the pixel program:


As long as lightDir is not yet normalized, it can be used to determine current distance if you calculated it according to ‘lightDir = lightPos - worldpos;’ in the vertex program.

It’s quite simple, all you need to do is add a float4 uniform, and ask the script to fill it with the light attenuation (you need to set it from the application).


Order of the array:

You are most likely going to create more than a single light in your scene, but up until now, our shader only handles the closest light to it. How can we include multiple lights to our lighting technique?

Truth be told, it’s a fairly technical things, but none the less, an important one to overview. In order to do this, we first need to create arrays so we could hold more than a single light’s information; lets declare some new globals: 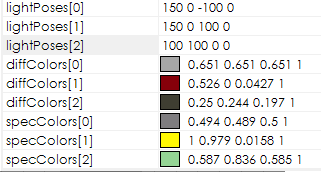 Now, we need to address this change in the structs; unlike our original vertex program, we now need to also output an array of light directions, and input those into the pixel program:

Our vertex program would not change much, only an added loop to calculate light directions per light source, all else stays the same:

While the changes to the pixel program are also minimal, they are more noticeable than the once in the vertex program.
First, two things have not changed: the normal and viewDir (since they do not change per source)
The things that did change are:


Let’s overview the new pixel program (this program use Phong reflection, but feel free to use Blinn):


First, we altered the diff and spec variables to be float4, so they could hold a color value. This is because we want to use different light colors per source, so we can’t apply a common color in the final calculation. Instead, we will add the values directly into diff and spec using each source’s values.

Now, we normalize the light direction, and calculate diffuse and specular per source in a loop. Than we add each light’s contribution to the final color using its own color data.

Lastly, we combine the three channels to a final output.

Sending information of multiple lights from an OGRE script is actually a minor modification; OGRE can send an array just like the ones we created. That means that you need to add all the needed arrays (including the amount of lights you are sending, if you wish to specify on the run).

Each light property you can send (such as light_position or light_diffuse_colour) has an _array equivalent (check OGRE manual, or use a script editor); the extra params fields will be the number of lights (picked by distance from object) you wish to include.

Type can be either diffuse or specular (or emissive, but we haven’t touched that)

OGRE scripts can also create preprocessor defines (like our lightCount), allowing us to use the same source code with the ’lightCount’ parameter.


Let’s take our current example and export it:
First, the HLSL file: 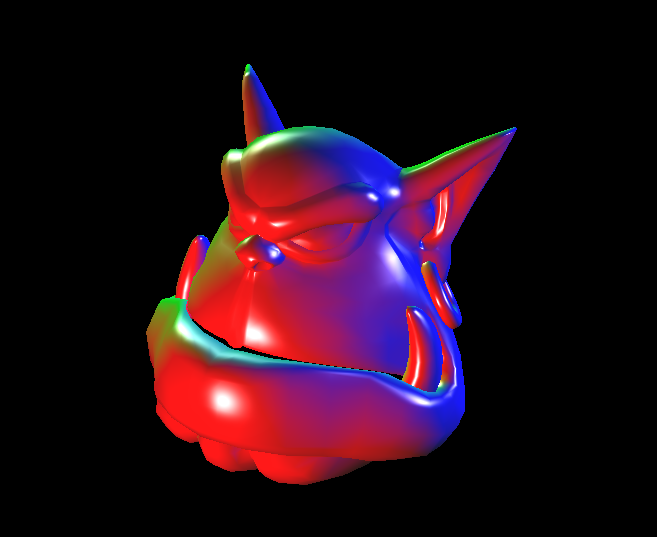 Add attenuation you lazy bastard, how about that?!

I’ll take care of it

Hey, guess what?
OGRE can iterate per light on its own, and you can control it via the script using your original one-light-capable shader!

WHAT??? So why did we write this long and tedious one?!


however, this technique has one main drawback: it has a hard-coded loop limit. that means that with a single light available, an additive blend will render once, while this shader will render its fixed 'n' times (even if you set if to 'jump over'- GPUs don't really do that, its an illusion created by using high level languages)

Why use additive lighting if it’s so bad for fps?


It’s a neat idea, and its code looks much prettier, but it’s not always fast (you know, like JAVA or Python. Wait… Python isn’t even pretty to look at… why does it still exist?).

We will review additive lighting in the last chapter 14 (last chapter for part one), after we learn blending.