You know what joke they always do when they start teaching lights right? There’s no need for me to say “lights on!” or “let there be light!” ….if I had to choose I’d pick “can has light? Kthxbi”


Ambient is the base color added to all surfaces. In deep space for instance, this color is complete blackness. An analogy on earth would be all light hitting an object which doesn’t originate directly from a light source, and thus is weakened and close to even on all spots. (light reflected from other objects)

Diffuse is light hitting an object directly from a light source and spreads evenly through the surfaces, depending on the surface angle towards the source.

The most common algorithm for diffuse is Lambertian reflectance, which we will use in our basic lighting shaders. Lambertian uses the dot product between the surface normal and the view direction vector to calculate diffuse.
It produces a smooth and gradual (and somewhat rough, like uncoated wood) lighting texture.

Specular is light reflected in a specular angle, creating the “shiny spot” (or strip) that is seen in reflective surfaces. The size and distribution of the specular depending on the “shininess factor” we provide, and the algorithm we use. This highlight is dynamic, and changes location and spread according to the angle from which the user views the object from.

The two most commonly used methods for specular are Phong and Blinn-Phong, we will learn them both.

A normal is a vector that points perfectly upwards from the surface (orthogonal). It indicates the direction to which the surface (or a specific point across it) is facing.

Is a vector which all of his components run between 0 and 1 in value keeping their original proportions compared to the vector's magnitude. Essentially, they are clamped so that the length of the vector will be 1 (a unit vector).
The magnitude of a 2d vector will be: √( X2 + Y2) (Pythagoras)
A vector (2, 1) when normalized will become (2/√5, 1/√5)

The dot product equals the multiplication of two vector’s magnitudes by each other and the cos(α) between them (|A|*|B|*cos(α)) as if they had originated from the same spot.

This function helps us determine the directional relationship between two vectors.

On unit vectors, the result is always between 1 and -1 (since it uses a cos function):
1. If the two vectors are orthogonal to each other, the result is 0

2. If two vectors are in opposite directions the result is -1 (Note, opposite can be facing each other or from each other)

3. If vectors are facing the same directions the result is 1 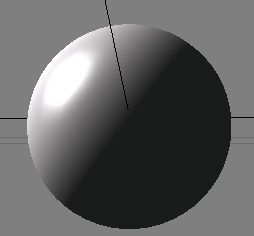 (Note, this isn’t a combination of the 3 above, because they combine ugly)

Gouraud shading is the simplest, fastest lighting method that combines ambient, diffuse and specular channels to light an object depending on the angle between the direction of the light source and the vertex’s normal.

For this shader, we will use Lambertian model for diffuse, and Phong reflection model for specular.

Adding ambient… or the new RED RING OF DEATH

As for ambient, it’s not very difficult. Just declare a COLOR and call it ambientColor. Give it whatever color you wish, but you might not want to make it very intense (0.125 is enough).

Now things will start getting a bit more complicated.
We need to take into consideration a few parameters:


Since we will be setting these variables by hand in FXC, remember to either insert values in the declaration or in the material properties.

In order to calculate the diffuse color of the vertex, we need to:


1: adding normal to vertex input
we need to add a normal to the vertex shader input:


Note that I used a function called saturate. This function clamps the value to between 0 and 1 (this is not equivalent to abs()! Values below 0 will become 0 and above 1 will become 1)

I did that because I don’t want my values to turn negative or exceed 1, because I’m accumulating color values. A negative dot product will sabotage ambient color by negating it where it doesn’t have any effect (such the opposite side of the light)

5: The state of things
At the moment, our program should look something like this:


Although you should be seeing sharp edged vertices, FXC seem to soften these. But you can see a somewhat murky line of vertices along the transition line to the dark side.

How do we calculate specular according to phong? We need to take into consideration these few things:

Phong model provides the simplest, most strait forward algorithm for specular reflection.
It goes like this:
(Theory only, actual code will come later):

Let’s see why and how, and don’t worry – it’s all pictures! Even a hamster can catch up! 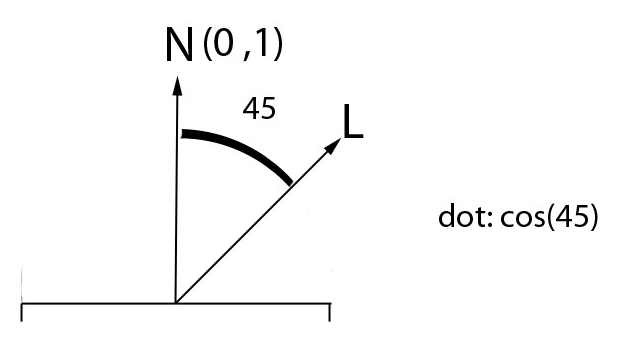 As mentioned, the dot product is cos(45) 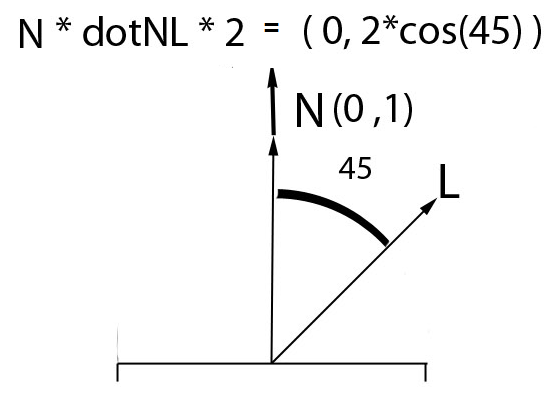 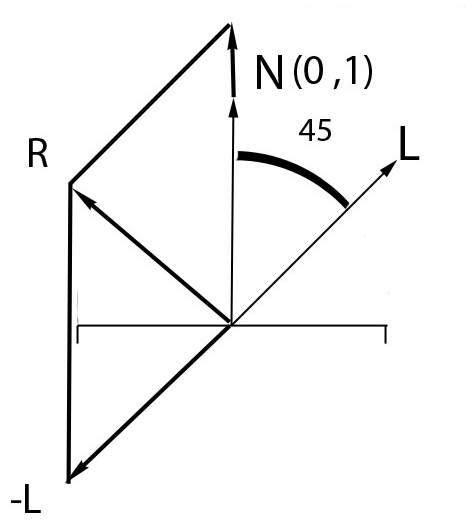 The second part of creating specular is to calculate the factor of the view angle (after we calculated the directional vector from the vertex to the camera) on the specular distribution depending on the angle between the reflection ray and the direction to the view, and according to a predefined factor we choose in advance.

In order to do that, we take the dot product of the direction of the view and the reflection vector, and pow() it by desired “shininess”. 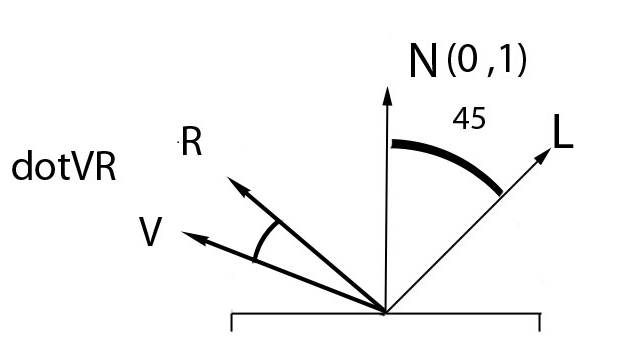 First thing we have to do, is to add a global variable that will automatically track the camera position (when we export to ogre we will have one provided from ogre, don’t worry)


Secondly, we need to calculate the direction from the vertex to the camera:
(again, since it’s a directional vector, we normalize it)


Now we calculate the reflection vector:


( dotNL and lightDir had already been calculated, you didn’t forget right? It's not like you fell asleep by now or something)


Note that I used saturate on dotRV as well. If I wouldn’t have, we would have a dark spot that mirrors the specular in position and behavior swallowing ambient light in the back of the object.

It’s kind of cool though (the ambient devouring blackness), try it.

The state of things


Our first per vertex shader is now complete!
You can try and add some other factors, such as light intensity or whatever… 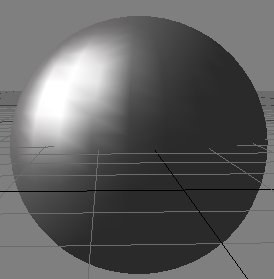 The result you should be getting. I divided the diffuse by 3 to make the specular show how ugly it is when using per vertex. 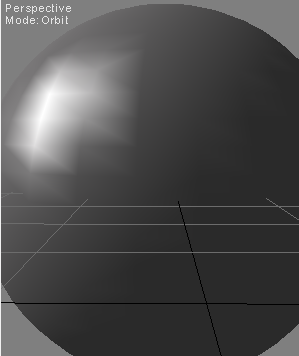 With higher shiny number you can see the effect of per vertex on specular better.

I know, it’s ugly, its supposed to be.

Unlike our earlier shaders, this shader actually has substance. This means you have to be more acute with your exporting skillz.
Make sure that:

When retrieving lights from OGRE via the scripts, you need to add an index – this tells ogre which light to choose. The index run from 0 to n, when 0 is the closest to the object and n is the farthest.
Such as:


When you finish, your files should look something like these: