Other types of light

“Point me to the right direction…”

Other than point lights, we have two other types of lights in OGRE:

These lights are probably the easiest thing in the world to calculate. All they have is a direction from which they are coming from (as if originating from infinity and traveling parallel).

All you have to do is ignore the position. That means we have one less calculation. There isn’t much more to tell, just show you the code (even that is redundant). OGRE sends directional lights' direction (xyz) instead of position, with the w component set to 0.

Spot lights are a bit more complicated, since they originate from a specific point, project to a specific direction, and have a cone which only in it the object is affected (like a flash light). These points make it somewhat trickier.

Let’s take a look at the spotlight: 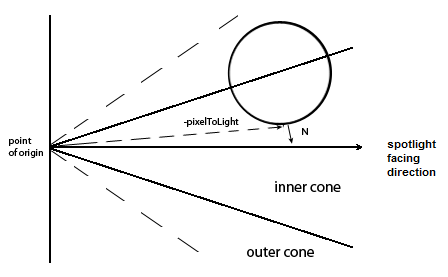 To avoid confusion, we will rename lightDir to pixelToLight since the spotlight has a facing direction.

We will use two dot products:


We have a few more variables however; when you ask for spotlight_params from OGRE material script, OGRE will send a float4 organized as such:


The forth value (w component) is used to help differentiate spotlights from point lights.

The cosine uses the half of the angle because the angle defines the cone, and we need only the angle between the side of the cone and the axis (which is the spotlight facing vector).

There are two parts for determining the effect of the cone of light on the object depending on its direction to it:


I ignore the falloff value, because I don’t really know what to do with it.

The vertex program remained almost unchanged, but take a look at it anyhow:


The main change is in the pixel program:
We begin the program by normalizing and preparing the dot products:


Now, let’s add the diffuse and specular as we described earlier and return the value:

You ask?
We need to know where the pixel is between the inner and outer cones, but in a relative value (range of 0 to 1).
Therefore, we must first do this:


This will give us the absolute difference between the dotPLd (the orthogonal to pixelToLight) and the inner cone limit.

In order to receive a relative value, we divide it by the absolute difference between the inner cone limit and the outer cone limit:


The problem is that the value is inversed (closest will equal 0) so we need to one minus it:


And finally, we need to address the angle towards the source of the light (dotNL):

When you ask for light data from OGRE material script, you will receive all lights depending on distance, therefore, you don’t know if it’s a point light, a directional light or a spotlight.

In order to address all three in one shader, we need to know how to differ them; we need three things from the material script:


Each type of light has a different signature (a different combination of values):
Point light:

“Why is light_direction not relevant in directional light?”

Because it is deprecated for greater flexibility. Instead, its inverse direction is sent in light_position, with the w component set to 0 to differ it from point or spot light.

The only reason it’s not deprecated in spotlights is that they have both direction and position.

As a closing note, lets write a shader that an handle multiple lights of any type!
Try and write it on your own, and don’t give up – it mihgt take a while.
Tips:

I wrote my own version for this; it’s a bit more mature than what we wrote up to this point, but all of its elements should be familiar to you. Just follow the work flow line by line (starting with the main programs) and you’ll get it.

A few words about it:


The shader in action; red directional, blue point light from below and white spotlight from the left. 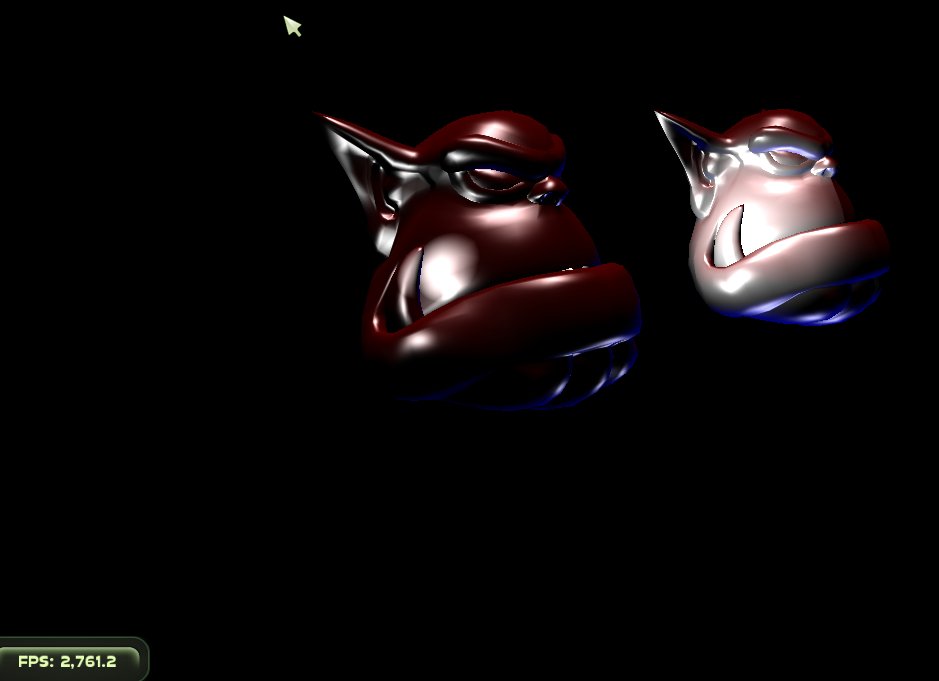