What are inflation and deflation?

Up until now, we usually mainly manipulated things pixel creation. While it’s true that most of the output we desire is mainly falls on the pixel program to perform (since we usually want the object to retain its shape) we can also manipulate vertices.

So, what does this have to do with normals?
One of the easiest (and most amusing) examples you’ll usually encounter in shading languages teaching material in early stages (this guide included) is how to move vertices along their own normal.

In inflation, we move the vertex along its normal outwards, and in deflation - the opposite.
What difference is there between just scaling and inflation/deflation? 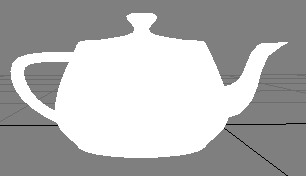 If we were to scale it, the result will be the obvious: 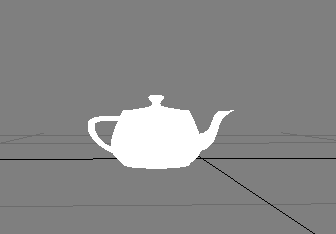 But it we inflate or deflate it, the result will be:

Changing along its own normal, our teapot had changed as if someone blew air in or out of it. This is especially useful when writing multi-pass techniques which require a shell around an object.

Let’s play around with this trick. First, we need to create the basic code. How do we inflate?

We need to add to each vertex position whatever value we desire, but in the direction of its normal. The simplest way to do so will be to multiply the normal by some factor and combine the new vector with the vertex position.


Notice I added the factor to XYZ. Since W is not meant to signify one of the axes (W is added to allow multiplication with matrices)

So, let’s complicate things a bit. Let’s use time to inflate and deflate over time. (Hence the female diet)

In order to use time we can use the TIME semantic in FXC. After we’re finished, we’ll learn how to send time from OGRE.

Problem with time is that it just keeps growing. To negate that, you can just use some trig function. I picked cos.
There isn’t much to tell, I’ll just show you a minimal code:


It doesn’t get simpler than that. I also divided the cos(time) by 20 to make the change more subtle.

Remember to press the play button to “run” your shader and see how it changes.

…These buttons (the two on the left..). I’ll bet you forgot all about it.

So, the real reason you’re here. Seeing something swell and shrink can be entertaining, but after you finished playing with the numbers and laughing like a dumbass it doesn’t scratch your brain much.

Let’s make it burn some of your IQ. Getting time from OGRE via material script is easy in theory, but it might be obscure if you don’t know what all those things mean.
I’ll make it shorter for you.

OGRE has a few methods to retrieve time via script, text taken strait from the OGRE manual:

What’s that cycle thing there?
You supply a maximum value and time count from 0 till it reaches it, when it does, its back to 0 again.

What’s the 0_1?
I really hope you were not thinking of asking that …“As time0_x but scaled to 0..1 “ shouldn’t really leave any room for interpretations.

0_2PI? What is?
If you haven’t learned that yet (or forgot), 2 times PI is a complete circle in radians. This means that you can either get the original angle in radians or trig it.

Try each one of these, see what happens. I used for this specific example costime_0_2pi – this way I didn’t have to produce the cosine from my code.
Remember to add the extra param to define the cycle (in seconds)