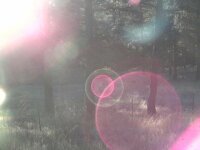 Lens flare is the light scattered in lens systems through generally unwanted image formation mechanisms, such as internal reflection and scattering from material inhomogeneities in the lens. These mechanisms differ from the intended image formation mechanism that depends on refraction of the image rays. For good optical systems and most images, flare is a secondary effect that is widely distributed across the image and thus not visible. But when an image includes a very bright light source, flare generated by a bright image region can have enough intensity to become very visible. The light produced by flare mechanisms superimposes broadly across the image, adding light to dark image regions and reducing image contrast.