Setting Up An Application - Shoggoth


Ogre does not provide support for VC6. It's from 1998, and rather old. It does not support ISO C++. It will only cause you pain.

It's recommended to use Visual C++ 2005 Express (also called VC8) instead.

If you absolutely must use that ancient thing, proceed on your own. You are not going to receive any support, other than people telling you to upgrade.

Note: If you are using VC++ .NET 2003 or later, you can use the Ogre Application Wizard and you are ready to create OGRE apps - feel free to skip down to the code section, as the application wizard will set up the project for you. Also see The Complete Blanks Guide To Using The OGRE SDK AppWizard - Shoggoth.

Otherwise, to manually configure the IDE, follow these steps:

To clarify where the DLL files should be, an easy way is to copy the \bin folder (containing \debug and \release) and the \media folder from the OGRE installation directory to your Testproject folder (note: in this case you might be copying DLLs that won't be needed, but it's the hassle-free way). If you follow the convention presented above and you created folders for the header, scripts and source files, you have the following folders under \Testproject (excluding subfolders): 'bin', 'include', 'media', 'testsolution', 'scripts', and 'src'. However, if you don't want to copy them while running your Testproject from Visual Studio just add the path to OGRE's DLL files to the %PATH% global environment variable like this:

and for the release version

This will not modify the %PATH% environment variable permanently, just for the given run, so its safer. You could modify it globally for all windows applications like this:

but this could lead to confusion if working with different Ogre versions and is not recommended.

If you follow the next few steps carefully, your project should compile without errors.

If you also use CEGUI, you need to tell Visual Studio to link the libs by doing this:

And, for those using the SDK:

Or, for those using the source release:

Additional hints on getting your application to run from within the IDE:<br \> 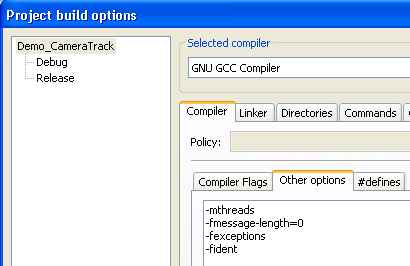 If your app does not define any custom IO templates then this define will speed up compiles.

this ensures that the DLL version of STLPort is used.

VERY IMPORTANT: The stlport include directory has to be first in the include directories. If it is not then headers used for libstdc++ could get included which will cause conflicts with stlport during the link stage. You will most likely get undefined reference error messages with member methods saying they require std::string (method parameters). You should never see std:: in an error message and if you do then it means that the STLPort headers were not found and libstdc++ headers were used instead. If you do end up in this scenerio, after you correct the directory problem you must do a rebuild so that everything gets recompiled with the proper headers. Selecting build won't do it since CB will just attempt to do the link stage again since it doesn't detect any changes in the source and will fail again.

this is the path to OgreMain.dll or OgreMain_d.dll along with stlport.5.0.dll or stlportstlg.5.0.dll depending on TARGET_NAME state. $(TARGET_NAME) is a built in macro that you can use in your project settings. It gives you the active project target build name. 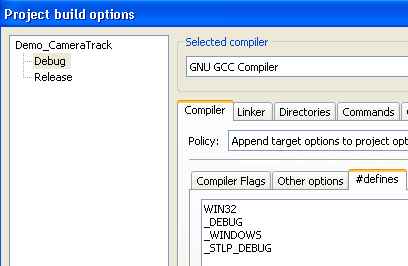 this is the name of the debug build of OgreMain dll.

this is the name of the release build of OgreMain dll.

Note: OGRE_HOME is a pre-defined environment variable setup by the SDK installer. OGRE_HOME points to the directory where the SDK is installed. You can use $(OGRE_HOME) within your build options when setting up paths to specific directories with the SDK that you will need to access.

WARNING Do not mix dll and static object builds using different STL implementations. Here is an example: You build a dll using stdlibc++ but your exe is built using STLPort. Everything that is c++ must be built using STLPort. This does not apply to C static libs and dll's.

Probably the top two problems people have with Ogre are not being able to compile or a missing dependency. For the first, you are going to need to learn how to use your compiler. If you barely know C++ then expect a challenge, but don't give up! Thousands of people have successfully gotten Ogre to work with both the GCC and MSVC compilers, so look in the wiki and forums for what they have done that you haven't. For missing dependencies, these are libraries that aren't installed, that aren't linked against your program, or that aren't in your runtime path. Other dependencies are incorrect rendering plugins in your plugins.cfg file or incorrect paths in your resources.cfg file, or missing one of the files all together.

If you have problems reread this page as well as Installing An SDK - Shoggoth and Building From Source - Shoggoth and look in the Ogre.log file. You may also find your problem answered in the Build FAQ. If you need further help, search the forums. It is likely your problem has happened to others many times. If this is a new issue, read the forum rules then ask away. Make sure to provide relevant details from your Ogre.log, exceptions, error messages, and/or debugger back traces. Be specific and people will be more able to help you.

Now we will create a basic source file for starting an OGRE application. This program, like the included samples, uses the example framework.

Copy the following code and include it as a new file in your project settings. Following our conventions, you'd put it in work_dir/src and name it SampleApp.cpp. Since this is dependent upon ExampleApplication.h and ExampleFrameListener.h make sure these files are accessible by your project. Our convention would have you put them in work_dir/include. You can copy them from the Samples directory.

Compile this code now. However before running the program, make sure you have a plugins.cfg and a resources.cfg in the same directory as the executable. Review the Prerequisites section for the purpose of these files. Edit them and make sure the paths are correct. Otherwise your OGRE setup dialog box may not have any rendering libraries in it, or you may recieve an error on your screen or in Ogre.log that looks something like this:

When the program starts it will display the OGRE setup dialog and start the application with a blank, black screen containing little more than the OGRE logo and an FPS (frame per second) display. We haven't added anything to this scene yet, as evidenced by the empty createScene method. Press ESC to quit the application.

If you didn't get this, something is not right in your setup. See the Prerequisites and the Getting Help sections to review your installation.

The ExampleApplication framework will boot the OGRE system, displaying a configuration dialog, create a window, setup a camera and respond to the standard mouselook & WSAD controls. All you have to do is to fill in the 'createScene' implementation. If you want to do more advanced things like adding extra controls, choosing a different scene manager, setting up different resource locations, etc, you will need to override more methods of ExampleApplication and maybe introduce a subclass of ExampleFrameListener.

As mentioned before, you don't have to use the ExampleApplication and ExampleFrameListener base classes. Use them to work through the tutorials and to test things out. For larger projects you'll want to write your own framework, or use one of the frameworks or engines available on Projects using OGRE.


Sinbad the lead developer and creator of OGRE, is British. Naturally he uses British spellings such as "Colour", "Initialise" and "Normalise". Watch out for these spellings in the API.

See below to learn about your resources for getting help. Then your next step is to work through the Ogre Tutorials.