I would like to implement Dual Quaternion skinning for the 2011 Google Summer of Code. A description of this algorithm can be found at http://isg.cs.tcd.ie/projects/DualQuaternions/.

Dual quaternion skinning addresses problems commonly associated with the linear blend skinning of animations such as skin collapsing. Implementation of this method is fairly straightforward on the GPU, and does not require extensive modifications of Ogre. This technique utilizes dual numbers to extend quaternions to represent both rotation and translation. This allows for an efficient representation of the transformations and for application of low-cost linear blending.

Animation in standard hardware skinning is done using matrices, and the conversion from a homogeneous transformation matrix to a dual quaternion is fairly straightforward. Yet one of the signs in the conversion is ambiguous, so an algorithm must be used to cope with antipodality. An antipodal point is the point that is diametrically opposite to a point on a sphere. The theoretically perfect algorithm has to be run in the vertex shader, increasing the shader complexity. This is not required because an alternative approximate algorithm can be used which may be pre-computed on the CPU. Though the approximate method may not always produce a correct output, it only produces incorrect results for rotations of bones greater than 180 degrees, which is uncommon in skinning.

In general, in order to achieve fast speeds, a linear blending method is preferred. Due to the nature of the transformation in dual quaternion skinning, however, it is more accurate to employ a spherical blending. An linear approximation method is available that still produces fairly accurate results. With this method, one performs a linear blending of the points and then re-normalizes the resultant dual quaternion to generate a suitable approximation of the blended result at speeds that are comparable to linear blend skinning. 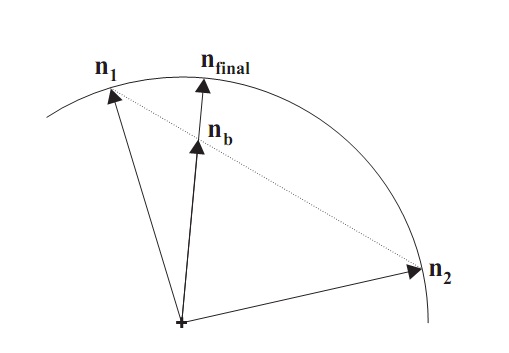 In the diagram above, linear blending of the two points n1 and n2 would produce an incorrect result. The resultant point is then re-normalized, which produces a fairly accurate blending.

The Dual quaternion Linear Blending (DLB) formula is given by:

In order to be compatible with Ogre’s new InstanceManager, several changes must be made to several of the InstanceBatch classes which implement the various instancing techniques. Three types of instancing in the new Ogre InstanceManager have support for skeletal animation: VTF (Vertex Texture Fetch) instancing, Hardware + VTF instancing, and shader-based instancing. Because both VTF and HW + VTF instancing techniques use Vertex Texture Fetch, the classes to support packing either dual quaternions or matrices into textures depending on the skinning type must be changed. As for the shader-based instancing technique, no changes in Ogre should be necessary. For all of the above techniques, new shaders must be written though they would largely be based on existing shaders. Currently the InstanceManager is not integrated with RTSS (Run-Time Shader System), and while integration is a compelling idea, simple provision of raw shader implementations of instancing without RTSS integration will be performed to maintain a focused project scope.

Implementation of this technique should be render system agnostic and is limited only by hardware and shader support. If implemented in all of the appropriate shading languages, it should support any render system that Ogre supports (GL, GL ES, DX9, DX11).

Although it avoids problems associated with linear blend skinning, blending with dual quaternions is marginally slower than linear blend skinning (according to the reference implementation, an extra 7 vertex shader instructions). The two phase skinning that supports scaling and shearing costs an additional 29 vertex shader instructions over linear blend skinning. Dual quaternion skinning occasionally causes flipping artifacts because the skin always goes the shorter way around. Yet, the overall increase in visual quality exceeds the associated performance costs, especially if scale and shear support is not required. The dual quaternion skinning method requires no changes at all to the resource pipeline and minimal effort on the artist side, so it is both easily available to users and widely applicable.

How will this project benefit OGRE users?
This is a method superior to linear blending and can be implemented with relative ease in a shader with proper support in Ogre. If RTSS is used, employment of dual quaternion skinning should be fairly seamless.

Is this project within the core scope of OGRE?
This is well within the scope of Ogre, and generally applicable to any animated model. No special animation methods or re-rigging are required.

This project certainly is of a suitable scope for the time allotted during the summer. In fact, even if half-completed, the results of project would still prove useful, as dual quaternion skinning with RTSS support is helpful in itself without instancing support.

Current State of the Art

Recent example-based methods have been developed for an efficient run-time performance comparable to standard hardware skinning. Most example-based methods, however, place an extra burden on the artists. For instance, in the Animation Space method described in “A Comparison of Linear Skinning Techniques for Character Animation,” artists need to produce models in various poses in order to automatically establish the multiple weights used in the algorithm. The WPSD technique described in “Real-Time Weighted Pose-Space Deformation on the GPU,” while appearing quite accurate, also requires such sample poses for weight generation. Due to the required extra steps, the example-based approach is not appropriate for a general-purpose engine such as Ogre.

Geometric Methods:
There several other geometric methods for skinning similar to dual quaternion skinning which also do not require any changes to rigging. Though these methods address some of the issues, they do not remove all of the artifacts and are often not as performant as dual quaternion blending.
For example, Log-Matrix Blending vs. Dual Quaternion Blending and Spherical Blend Skinning vs Dual Quaternion Blending:

Alternative Rigging:
These methods also allow for impressive visual results. However, just as with example-based techniques, the changes required in the resource pipelines render it prohibitive to implement as a general animation method in Ogre.

Note, while the website of the paper does not contain a full project, it contains both a .c source file and a Cg shader that contain the bulk of the implementation.

April 25th – May 23rd
Get to know mentor
Work on shader programming, quaternion and dual number math
Firm handle on integration with Ogre

Deliverable: Extensive Doxygen documentation and a tutorial about how to integrate the technique with custom shaders

Due to my university's academic schedule, I will still be in school for the first three weeks of the GSoC. I do not feel that this will impact the progress of the project significantly, however, as I have held a programming job in addition to my undergraduate studies in the past. I will be unavailable the week of exams as noted in the schedule above. To compensate I will certainly make a strong effort in the weeks following weeks to make up for lost time as I do not have any other commitments for this upcoming summer.

Why You're The Person For This Project

I am a 20 year old Computer Engineering student from the United States. I have been programming in various languages since I was nine years old and I have been using C++ for eight years. Recently I have been working to convert a ~30,000 line C++ project to C# as a contractor for a company. I have worked with Ogre since version 0.14 and I have done various terrain, lighting, and shadow experiments with Ogre. I’ve also successfully used FFMpeg to play videos on a texture with Ogre. In addition, I have open-source experience in that I wrote the initial version of the Mac OSX joystick backend for OIS (Object-Oriented Input System).

Due to the nature of the job, I cannot show you an example of the professional work I that I have done; however, I have provided samples from the OIS work I have done in the past. I believe these to be largely unchanged, although I believe there were a few small patches contributed: MacJoyStick.cpp. I also contributed various changes in the MacHIDManager: MacHIDManager.cpp

I have been involved in the Ogre forums since 2005. I am more apt to read the forums than I am to write in threads, although I am reaching to the point in my experience with this program that I feel I can contribute more of my knowledge. I also was quite active on the WGE sub-forum of the OIS forums http://www.wreckedgames.com/forum/. I have not been as active online lately due to the labors of my University studying; however, through this project I hope to reinvigorate my participation.

3D graphics programming has always been one of my favorite activities and over the past few years I have truly enjoyed using Ogre. As I gained knowledge and learned how to program, I benefited from the friendly community of fellow Ogre-users and the extensive documentation available. I end up reading the forums almost daily. It would be a great honor for me to be able to help this project that has truly inspired me.

I am aware of the advanced mathematics that are involved in this project, and I admit that I have not fully grasped to implications of some of the constructs in their entirety. To be straightforward, I found a few of the derivations in the paper to be quite tricky. However, I have a solid mathematical background, including multivariable calculus and linear algebra, and I have been researching the mathematics involved in this project. Although the mathematics used in developing this technique are sophisticated, the actual implementation of the technique should be more mathematically straightforward. I have developed a good understanding of the subject matter and I am confident that I have the potential to successfully execute this project.